We’ve invited Sumartist back to Metroview’s head office to create a second inspiring art piece. This time, the mural entitled ‘Overhead Dreams’ pays tribute to the vibrancy of Yonge Street. What sets this artistic creation apart, and delights employees and visitors alike, is the way in which it provides a bird’s-eye view of the Yonge Street of today – and that of tomorrow.

We spoke with Sumartist to find out more about how this art piece came to be and his thoughts on the rich history, and future, of Yonge Street.

What is the title of your latest work for Metroview and how did you come up with the concept?

SUMARTIST: The latest mural is titled ‘Overhead Dreams’ because the mural is an overhead view of Metroview’s upcoming projects for the Richmond Hill community.

The concept was derived by utilizing the overview of iconic Yonge Street in Richmond Hill, to illustrate in detail how Metroview intends on leading the charge in developing this city’s central corridor. I also chose to highlight key sites such as amenities, restaurants and parks in hopes to give a visual understanding of the upcoming cultural hub they clearly intend it to be.

Can you describe your creative process in designing the mural?

S: My creative process started mainly by looking for a way to marry the simple monochromatic properties of this beautiful modern office, with some perspective-challenging visuals. In order to do that, I added in pops of supersaturated vibrant colours to contrast with the monochromes and then added in anamorphic three-dimensional line renders for the sites of interest. The point being to create a mural that was both visually congruent to the space and also satisfyingly architectural.

How would you describe this art piece to someone who hasn’t seen it?

S: It’s an overhead black and white line drawing of Yonge Street, where each building has been drawn in 3D to pop off the wall, and each building and landmark has been painted in a vibrant identifying colour.

What materials, colours and technique(s) did you use and why?

I used all acrylic paint for this mural, as well as an airbrush to transparently shade in the buildings to almost give them a digital appeal, as well as create the drop shadows for a more 3D effect.

What are the 3D elements?

S: The foremost 3D elements are Metroview Developments current build sites that have been expanded as transparent renders to indicate the intention of the future plans. The other 3D elements are peppered throughout the mural to indicate bus routes, cultural sites, libraries, restaurants, theatres and parks. 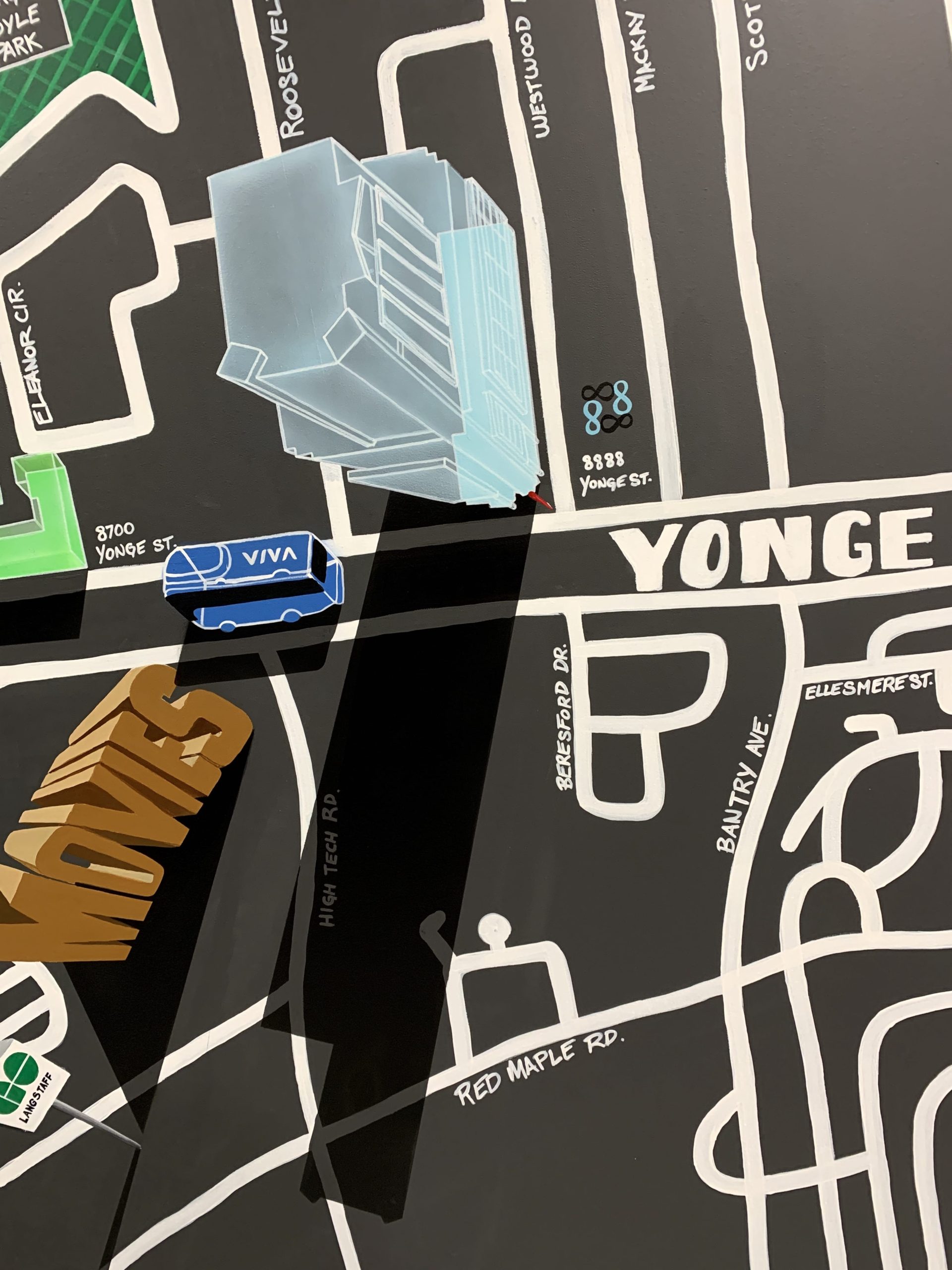 What do you think Yonge Street means for Toronto? Why is it important?

S: Yonge Street is iconic simply because for the longest time it was known as the longest street in the world (1,896 km) until 1999 when we put that to rest by excluding its extension of Highway 11. The construction of Yonge Street is also one of the highlights in the birth of Canada, as it was fundamental in the development of Upper Canada forming the basis of our concession roads that linked cities and suburbs to our agricultural regions. In the early years of Toronto, the main suburbs outside of the core spanned from Forrest Hill up to Richmond Hill all the way up Yonge Street, making it one of the main arteries of the city. But more than that, it has always served as a centreline and cultural epicentre for our city’s festivals and parades.

With so much happening on Yonge Street, how did you select the places of interest you featured?

S: We selected these places of interest to highlight viable hotspots and amazing amenities that cater to both the intersecting communities as well as all of the Yonge Street Metroview residential developments.

What is the message or feeling you’d like viewers of this mural to come away with?

S: I would love the people that view this mural to, at first instance, be struck by the interesting visual perspective of an anamorphic mural, and then just as immediately, have them take in the amazing overall scope of this projection of the future that Metroview has efficiently and eloquently defined.

Sumartist’s paintings, sculptures and installations can be seen at permanent locations all over the city (including Fran’s Upperdeck, Sicilian Sidewalk Cafe, Nomads Restobar, BMO in Stackt Market, Come see me, 905Ink and Graffiti Alley) and more recently his new mural at Savvy Bistro in Brooklyn, NY and Da’Vine Wine and Sushi on Harbor Island, Bahamas. Later this year, he will showcase his body of work at his first solo show. You can see more of his art on Instagram @sumartist.